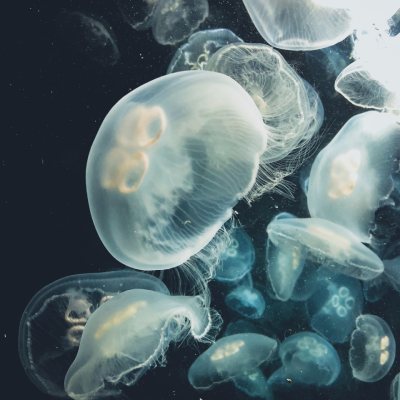 I wasn't just a musician when I was young. I had many talents. I was an incredible springboard diver, for one thing.  I was also a surfer. I lived in Palm Beach by the Atlantic Ocean.

I lived on the island for over twenty years. It was an interesting place to grow up. There are so many things to talk about. Today, let's talk about surfing.

An experienced surfer learns to anticipate the waves. It is a combination of feeling the current, positioning, creating momentum sufficient to let gravity and lift take over, and enjoying the ride. 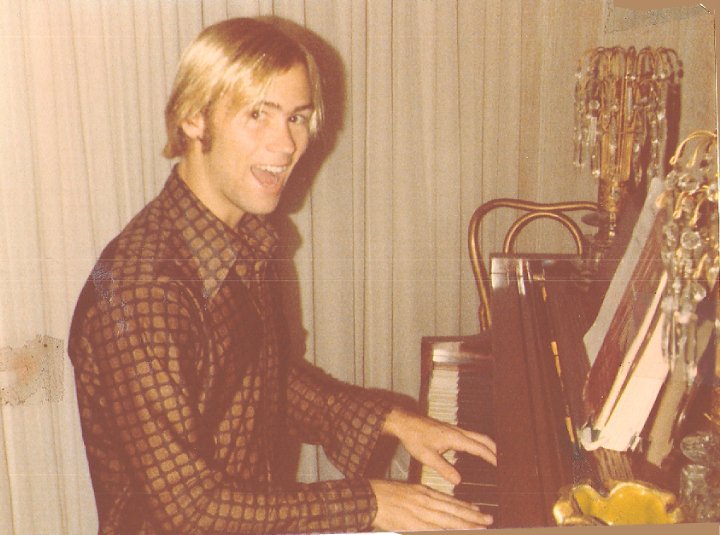 I don't mean wiping out. That can be sort of fun. Normally, in Palm Beach you'd live to tell about it. The waves are rarely above eight feet. The tough part is catching the wave in the first place. Your sense of what is happening in the grand scheme of the Atlantic Ocean needs to be pretty keen. One moment off in your launch and you'll be too far ahead of the wave. Too late and you'll lack the momentum you need when it comes. Too far to the north or south and you'd miss the potentially tubular crest. 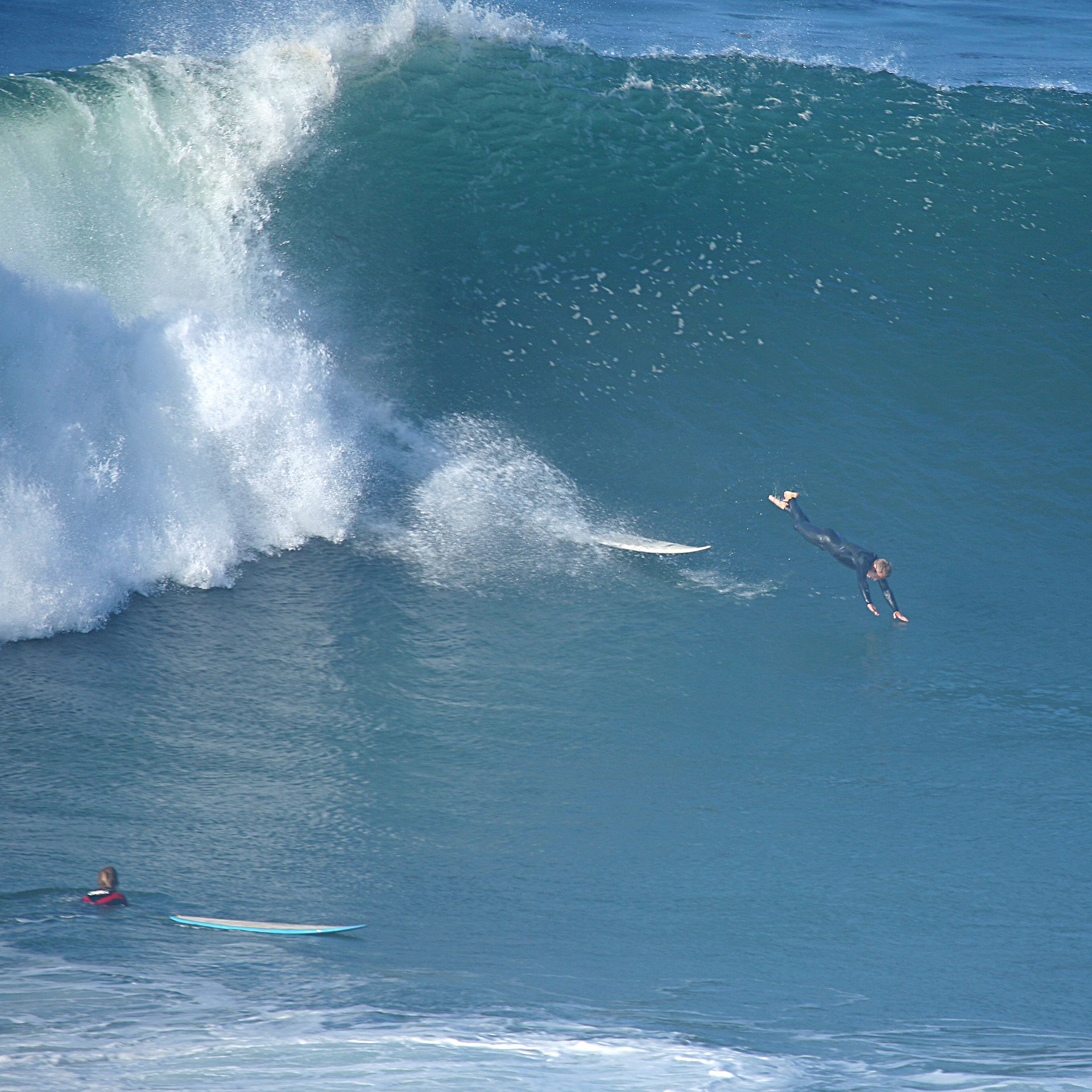 It's the best analogy I can think of for how visionary entrepreneurs decide to act on their ideas. The ideas are fluid. They assess and integrate the energy around them. They feel the current. They see in subtlety. They use both their head and their gut. What is happening close by, mid distance, far away, to the left and to the right? When will the next set come in? Should I let the first wave in a set pass so I can measure the break? Should I, perhaps, learn from the mistakes of someone going before me? 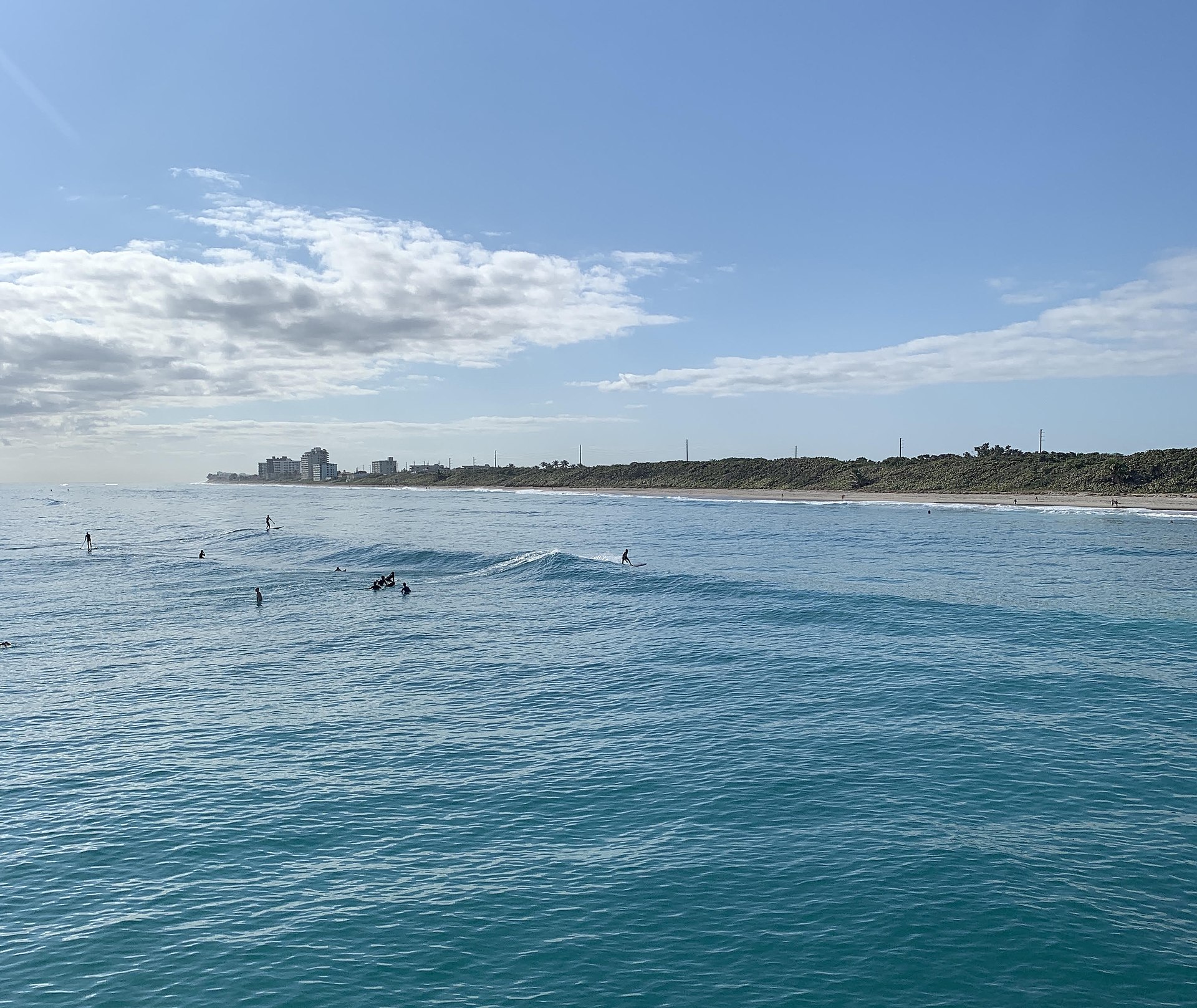 JUNO BEACH SURFERS WAIT PATIENTLY WHILE ONE TAKES THE FIRST WAVE IN A SET.

The visionary entrepreneur reads all these things and considers a plan - when to move and how. The majority of time is spent in contemplation, in dreams. I could enjoy the feel of the salt, like anyone else at the beach. I loved basking in the sun, playing frisbee and football with my big brother. The cool of the water was available all year long. Surfing was optional. Even on a typical day with waves two to three feet, just floating on the board once positioned, would be satisfying. Either way, I would have my eye out for sharks and underwater nasties, like jelly fish and Portuguese man-o-war from the moment I set out. Either way, I'd be thinking about the perfect ride.

The perfect ride will come on that rare day when the surf is up as high as it gets. Half of the enterprise will be getting past the shore break to position for the set. Paddling against the stream sometimes requires ducking under incoming waves, letting their force not push you back into shore. Only the unlearned try to cross over large broken waves at the surface. For an entrepreneur, this is quick positioning. It's akin to saving money and acquiring resources for the next project.

Lorem Ipsum has been the industry's standard dummy text ever since the 1500s, when an unknown printer took a galley of type and scrambled it to make a type specimen book.

This little surfing analogy is the only way I can explain how I knew that the Internet needed to be fixed. At the turn of the Millennium, I already saw that highly funded search engine companies were manipulating search results. Usually, they gave preference to their advertisers. But it wasn't just that. It was the algorithms. If you did it like Yahoo was doing it, your results would appear alphabetically. It was convenient for those who knew the name of what they were looking for but otherwise tilted towards those with names like 111Aardvark.com. Search by key word was hardly a thing yet.

I had that in mind when I incorporated as AAAAA, Inc. and bought aaaaaibmb.com. Couldn't hurt.

AAAAA, Inc. was the DBA name for the Advanced Advertising Agents Awards Association, Inc. The IBMB part was the Internet Business Monitoring Bureau. There were two main objectives. The first was to relegate advertising to specific places on searches so they were clearly identified. I was interested in fairness in search. Placement mattered. The second was to monitor the quality of the web, promoting worthy and helpful web properties to the top, and issuing warnings concerning scams, viruses and other dangers in the the WWW ocean waters.

The IBMB was an Internet watchdog group, and Ghostsurfers Intl. was my International network of phantom shopping watch dogs, sniffing out the best and worst of the web. My ghostsurfers had halos for a reason. I had been to a Catholic seminary - an Orthodox one too. I loved the saints. But there was more to it than that. I was out to defeat Yahoo. Google did not yet exist at that time.

With all due respect to the needs of shareholders to earn a profit, in the world of search, what the world needed most was good old fashioned normative business ethics. Motive matters in ethics. World wide access was something that was going to affect every person on the planet. That type of reach was going to give tremendous power to Yahoo's shareholders, through their executives. I could feel it like I felt the currents of the ocean. The most fundamental flaw in the web that was emerging was an ethical one. There was a lack of awareness of responsibility. Yahoo probably thought their approach was entirely ethical.

It's a worldly thing. Businesses tend to do good for the masses only if doing so benefits them, and that all seems to be okay. An instrumental mentality prevails. Will doing the right thing help the company? If not, why do it? What will the cost be? Sure, they'll do the right thing, or appear to do so. That makes them look good. It earns their trust. People may even think they're a saintly company for all the good they do. Count their freebies. It's an amazing thing how much they give away for free! When Google rose up to win the search engine race, nothing changed. I think it was worse. They were destined to seek absolute control, not just great profits. I could sense it coming like a wave as I prepared to launch.

JELLY FISH HAVE LIMITED POWER TO LAUNCH. THEY ARE DEPENDENT ON THE ASSISTANCE OF OCEAN CURRENTS

The digital world is full of freebies because it doesn't cost money to give tons of free things away. At some point, they do ask for money, of course. Every tech company has a profit model. There's nothing wrong with that. They all have to monetize. It's ideal to maximize profits, just like that perfect wave. But who gets hurt in the process? Wisely, the company, even an evil company, will make it appear that nobody gets hurt.  They have a halo. It's not hard to do. And they want you to see it. They can take tax deductions on their massive profits as they give to charity so they can usually afford to give at least something away. And doing so is an investment in public trust. Shareholders tolerate giving much away to the public free of charge because the loyalty perk brings long term corporate value. The freebies are what buys consumers' trust. I took advantage of that myself.

I'll tell you more about this in my next blog. For now, what I wanted to accomplish was to share with you the thoughts I was first having. I was having a flood thoughts. A lot of those thoughts were about doing things right. Before I was a profiteer, I was a consumer. I didn't want to see the Internet ruined by those thirsting for money and power.

It was the golden rule, and hidden underneath it all, what mattered to me was the motive. If charity is deceptive, where is the value? An enlightened instrumentality might recognize this and make doing the right thing a policy. But I'd question whether this is good enough either. Sitting on my surf board, contemplating the incoming waves, knowing some of the other surfers, I realized this was going to happen. I realized that in the days ahead the search engine companies would be among the web's most lucrative properties. I knew advertising dollars would pour into them. And I knew they would pretend to be do-gooders, but that they would find ways to cheat the system. And I was right.

SURFING ON A CLEAR IDEAL DAY IS IRRESISTIBLE FUN AND MANY WILL LAUNCH, BUT WHO WILL BE FIRST?

I had a choice. Just let it happen, or try to catch the first wave in the set before dozens of others launched. Even if I failed, (and I did know the odds were seriously stacked against me), I would be the first to try. People on the beach might see me over the clear glassy path between us. I would probably never fully launch. I didn't have the strength or momentum to catch the coming wave. I wasn't in the right place. I didn't have the technical experience or background. All I had was my own exceptional strength,  vision, and burning passion. But I had to do what I had to do. I had to try. I had to show them what a true surfer's halo was. So paddle I did, with all my strength. I was young. If I failed, there would always be other sets, I reasoned.

And that is how this ghost story began, the story of Ghostsurfers.com. I was going to build a better search engine - one that offered search for the right reasons, better search. I launched onto the first wave in the first set. I went from fluid ideas in an ocean of possibility, to solid, directed effort, pathetically I'll admit, like a jelly fish pushing through the current, a surfer hoping to catch the perfect wave at the perfect time. Let me tell you about what happened...